Ah yeah baby, time to get your Greek mythos groove on!

Posted by smokin cheez   5th January 2015
Welcome to Funk of Titans, a free-run 2.5D platformer for the Xbox One, developed by indie company A Crowd of Monsters. Based around a funky and musical version of the Greek pantheon, you play as groovy Perseus who tries to rid the world of the evil Pop, Rap and Rock Titans so Funk can reign supreme still. It will be arriving January 9th, 2015 to Xbox Live and will be priced at $12.49 or £9.99.

https://www.youtube.com/watch?v=IDqSfNn2EUw
STORY & CHARACTERS
Perseus runs throughout the land in order to rid it of enslaved, zombie soldiers and collecting vinyls. He has his trusty sword which slices through enemies, doors and ancient pottery in order to survive and collect more vinyls. The game isn't only a platformer, there are also quick-time-event (QTE) boss battles against big creatures known as Grunts and, of course, the Titans. These Titans are wreaking havoc across the Funk world by unleashing new age music upon the land, trying to cease the soothing and moving sounds of Funk. You hilariously defeat them via dance-off battles where a QTE initiates to the sound of the music.

The Gods and Titans throughout the world are represented in a unique fashion; Zeus, Father of the Gods, looks like Morpheus from The Matrix while Hercules looks like a chubby fat kid with acne. The Titans represent their brand of music, Medusa is Pop and looks like Lady Gaga while for Rap there's Polyphemus (I'm assuming, there's many cyclopi in the pantheon) and looks like Pitbull. The atmosphere in the game is comical and made me laugh many times, you can tell the team at A Crowd of Monsters didn't want a serious game and just wanted players to relax and have a good chuckle over their wacky style. 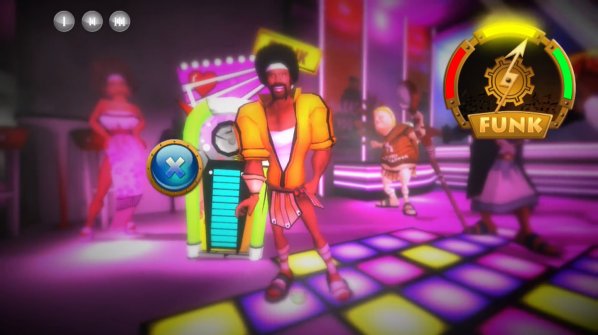 Enemies include the zombified soldiers I mentioned earlier, but there are 3 types of them; these include enemies that you can hit and jump on, zombies with spiked helmets that you can hit but CAN'T jump on, and finally ones that can't be hit but can be jumped on who hold spiked shields in front of them. You need to be quick on your feet to know how to react to each!

Zeus wishes for his son to be the best he can be, and by completing his Heroic Missions Perseus can obtain higher levels that allow you to purchase other items. These Missions include such tasks as breaking 10 objects in a level or defeating 25 enemies with the Mace equipped. After you complete a set of 3 tasks you level up, and continue doing random objectives to continue leveling. I found some of these tasks kind of mundane and was simply added to fuel the replay value for the game, as many are counter-productive to achieving a perfect score in a level (i.e. completing a level naked). 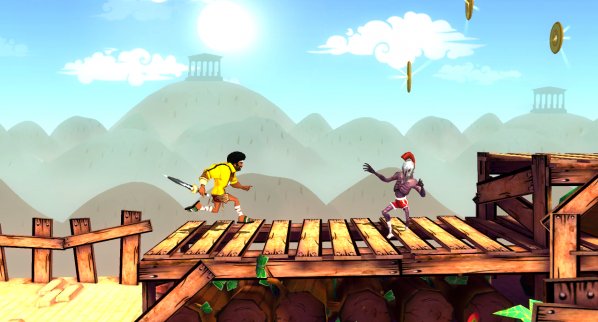 GAMEPLAY
While initially suspecting that the game would be bland, soon I found out that it has its own complexity when it comes to collecting everything in order to obtain all 3 medals. Certain doors can only be opened by obtainable melee weapons in the shop, and many coins out of reach have their own unique way of getting to them. The 3 medals in a game include Intactus, completing the level without getting hit; Vinylus, completing the level after collecting all 100 vinyls; and Pegasus, collecting the secret Pegasus item in the level.

The basic mechanic is that Perseus is always running, when encountered by doors or enemies you hit X in order to dispatch them with a swing of your sword. Perseus can jump over obstacles, which there are many, and even bounce off the heads of enemies to gain extra height. As Perseus progresses through the lands of Pop, Rap and Rock, the course will get increasingly difficult and more obstacles will be placed in his way. This includes an many more change of directions in his running, attempting to confuse the player and having trampolines, swings and later on projectiles and moving walls to move onto other platforms and you can slide down walls and cliffs while usually avoiding a firey injury.

While seeming linear, some of the levels have different paths to choose from, though often the ones that seem like the right way are, in fact, not. There is only one true path to follow that leads you to a perfect score while the others simply finish the level. I found this really enjoyable and made me replay levels just to see what that true path was because Funk of Titans encourages a sense of exploration throughout the levels and the reward for completion always feels satisfying. To hear him say "HAHA awwwhhh yeee" makes you join in. 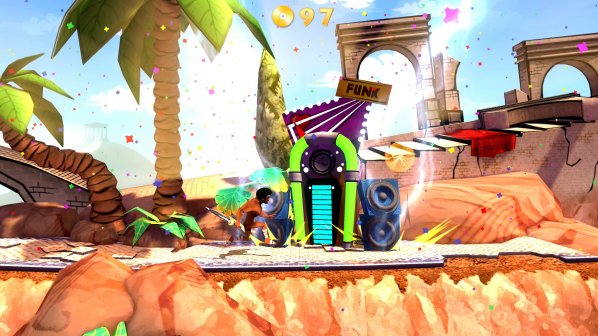 While running throughout the adventure, if Perseus gets hit by an enemy or one of the many other deadly traps in the levels he will lose his clothing, leaving him in nothing but his boxers. After getting hit again you will lose and have to begin the level all over again. Although, if you fall from a ledge into the abysss below platforms then you will have to begin the level from the start altogether. The only problem I had with this while playing was, sometimes, I'd get hit by an enemy and the recoil the pushes you back an appropriate distance from the threat threw me off the platform. It can be extremely frustrating when you're deep in a level and somewhat unfair.

Throughout each level you will also encounter a Pegasus item; when you collect these figures you unlock an extra stage much like the Helicopter game where Perseus will ride his Pegasus collecting vinyls and avoiding obstacles while the player uses the A button to keep him aloft. As you collect you go further in the tunnel it will speed up the pace and add in projectiles to try to hit you. You will laugh as I laughed at Perseus gaining altitude by flapping his arms. As an avid Helicopter player I had fun with this at first, but found it frustrating at points when there wasn't a way to avoid getting hit as a projectile took up the only space that I could fly through. There are quite a few patches that could go into this game from the developers, but then again they aren't terribly significant.

ACHIEVEMENTS & COLLECTIBLES
As I mentioned earlier with the Jason mask, there are many different unique items to buy in the shop. These each cost vinyls and some of the melee weapons open specific doors. There are many other helmets that can be collected for Perseus as well, such as a Spartan, Storm Trooper, or even Optimus Prime helmet. The only thing I wish that could have been added to the game was something that notifies you which weapon you'd need for a level PRIOR to playing it first.

The achievements for Funk of Titans aren't terribly difficult, there are simply grindey. Such achievements include having to complete every level and obtain all 3 medals or completing all Heroic Missions outlined by Zeus. Some tougher ones are completing all QTE encounters without messing up. It's a pretty easy completion and 1000 gamerscore for a downloadable game.

SUMMARY
As someone who doesn't play these types of games often I actually found myself enjoying Funk of Titans. The funky take on Greek mythology peaked my interest as well as making me laugh at some of the characters and items that can be collected. It incorporates the right amount of ease-of-play along with a challenge and can become addicting in order to collect those 3 medals for each level. It's not the best game around and there are faults with it but for a groovy time, a few good laughs and the easy completion I would say it's worth having a go at it. I recommend this game to gamers of all ages, children included (though many references will go over their head).

Not what I expected.